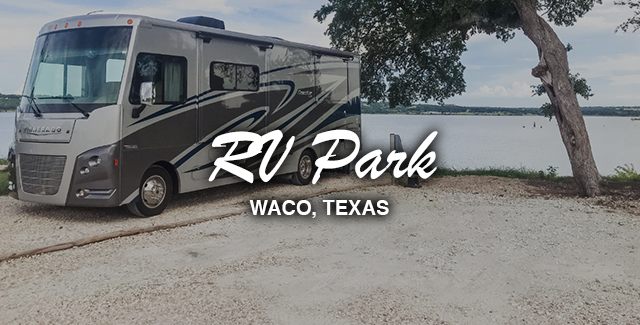 With Hurricane Hanna having made landfall in Texas, we had timed leaving Destin, FL as Hurricane Isaias approached the east coast. So much rain with windy weather as we had our marathon drive leaving Florida and getting out of Alabama, Mississippi, to Louisiana… blazing through these states off the I-10 on a 9 hour drive. Yesterday, we boondocked at Buc-ee’s in Katy, TX… only 3 hours from Waco, TX.

RV SITE #A9 – THE NIGHTMARE OF ARRIVING AND SETTING UP

Bumpy road that leads to the RV park.

We had made reservations by phone and were given confirmation plus additional instructions by email. We continue forward to find our spot.

I helped Bill back up the Winnebago quite nicely not to run into the tree and ensuring there was room to put the slides out.

Ooops! We parked in the wrong space. Do-over… Lol… Much better:

Jack pads required here and who wouldn’t want to use it to protect your jacks.

In setting up, our electrical panel had no electricity!

We called for assistance as there was no indication that there is an office or on-site campground host. We had to leave a voicemail and play the waiting game.

While waiting we syphoned electricity from the next door empty space (A10). It took a few hours to get a call back about our electricity. We were told someone was going to arrive in A10 that evening so they would send someone to look into the issue. When someone did arrive to replace the 30 AMP, he did mention that they’ve had issue with A9 panel. Maybe that should be communicated to the person taking reservations. Later on we found out that it is his wife that’s the reservations person. Hmmmm.

After all the driving one does to get to an RV Park, no one really wants to deal with this hiccup… where you can’t feel set up or settled in. Wondering… Should we set up now? Will we have to move and set up again?

The maintenance guy also mentioned he and his wife are the camp hosts and were parked a few RVs down. It’d be nice if they had a sign next to their RV indicating this fact. They did not.

Don’t know what time it was but I was in bed… getting hot in the coach. Left the bedroom to check on the a/c… noticed the microwave clock wasn’t on. Checked the A/C and it was still on but not working. Suddenly, the electricity kicked in and the tv in the living area turned on. Hmmm. Went back to bed.

11:30pm and I was getting hot in the coach again. No microwave clock again. No electricity again!!! Made a call… no one picks up. Had to get dressed and knock on the campground hosts’ door. As Bill knocked on their door, the wife answered the door… didn’t say a word… simply glared and stared at Bill. Bill nicely said, “Sorry to bother you, but we don’t have electricity.” She sends her husband out… the nice maintenance man we met earlier.

Good thing our motorcoach has a surge protector.

He gave us a 50amp adapter to borrow. Back to sleep. Tomorrow should be better.

Side Note: Need to buy a 50 amp adapter!

Breakfast with a view – greek yogurt with fresh raspberries.

We take a morning stroll before the heat of the day. If you love deer, you’ll love Lake Waco.

We did some research and found out a houseboat from HGTV’s Fixer Upper is docked here. We take the morning to have our own Fixer Upper Tour.

Aside from dealing with our camp hosts and having setup issues, the location was great – deers, birds, the lake, a very quiet setting and our own Fixer Upper tour.

QUESTION: What’s a few of your favorite RV Parks and why?