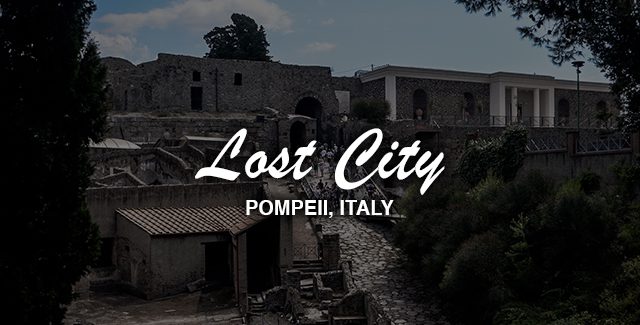 Did you get your interest in archaeology from movies like Indiana Jones… raising your curiosity about history and exploration? History geek or not (as I am quite honestly not a history buff), a visit to the Italy’s lost city of Pompeii should be on your list.

What I found fascinating was how amazingly preserved Pompeii was to give us a glimpse to Roman life back then. Pompeii was buried by the 79 A.D. eruption of Mount Vesuvius but rediscovered in 1748. Here was our do-it-yourself discovery tour of Pompeii.

We purchased tickets at the Roma Termini and hopped on the Frecciarossa (a high-speed train of the Italian national train operator Trenitalia). Ever been on a bullet train? This one operates at speeds up to 300 km/h (190mph). I believe it only took 1hr 10min to get there. By car, would’ve doubled the travel time.

OUTSIDE THE POMPEII RUINS

If you skipped breakfast, there are plenty of vendors to grab a snack.

Bill investigates that we arrived in the right area.

The growing line of visitors, which had already wrapped around the corner, was a clue that we were in the right place.

As we wait, Bill continues to brush up on any tips by Rick Steves.

You can also take a Virtual Street Tour of Pompeii using Google Streetview where some 360 photographers provide 360 panoramic views of Pompeii. I also love Planet Pompeii – A map completely dedicated to one of the most important archaeological sites in the world Where the time stopped at 79 AD.

Mount Vesuvius: It’s most famous eruption was in 79 A.D. "…Buried the ancient Roman city of Pompeii… Two thousand people died, and the city was abandoned for almost as many years. When a group of explorers rediscovered the site in 1748." – History.com

The Walls of Pompeii

"Pompeii was founded on a terrace which provided a natural defence. This was strengthened by ditches and walls along its contour. The town has a roughly elliptical shape, rather than the rectangular one which is typical of those founded by the Romans following the pattern of their military camps. The length of the walls is approximately two miles and the area within the walls is approximately twenty acres. The inhabitants were in the region of 10,000." – Travel to Eat

The Forum was the main town square and was strictly pedestrian only.

"The Forum was designed in the 2nd century BCE. Its columns were built using local dark volcanic stone, but in the Ist century CE, many of them were replaced by white limestone columns. The capitals of the lower row were designed according to the Doric order and those of the upper row according to the Ionian one." – Travel to Eat

Statue of Artemis / Diana at the Temple of Apollo

At the Temple of Apollo was the bronze statue of his twin sister -Diana “The Huntress.” The daughter of the Roman god Jupiter, she was primarily associated with hunting, she was also revered as the goddess of the woods, children, childbirth, fertility, chastity, the moon, and wild animals. –Greek Gods And Goddesses

"The temple held a statue of Jupiter but now only the head remains." – Pompeii Pictures

On the left-side of the photos below show – Arco di Augusto (The Arch of Augustus), the Emperor.

The Grain Stores is a building used for storing archaeological findings.

“Until now it’s been widely assumed that most of the victims were asphyxiated by volcanic ash and gas. But a recent study says most died instantly of extreme heat, with many casualties shocked into a sort of instant rigor mortis.” –Natgeo

“Plaster cast of a Pompeiian volcano victim, made from a centuries-old hollow in solidified ash.” –Natgeo

“…shows a young woman who died of suffocation from fumes and falling ash.” –ThoughtCo

“The temple included a small courtyard, an altar and a small temple with four columns on a high basis, accessible from both sides… Date of excavation: 1817.” –PompeiiSites.org

“Basilicas are among the oldest and most important building styles in ancient Rome. They were a place for large groups to gather to discuss business and deal with legal matters. Basilicas were located in the forum (main square) of a city… The purpose and style of Roman basilicas evolved from earlier Greek stoas, open-air markets where people went to trade and do business.” –USA Today

The Streets of Pompeii

Walking along Via Marina with The Forum dead ahead.

"the stepping stones kept your feet dry and out of the rainwater, slops, and animal waste that would have filled the streets of Pompeii… One of the duties of the Roman officer called an aedile was responsible for keeping the streets clean, helped along by the occasional rainstorm." – ThoughtCo