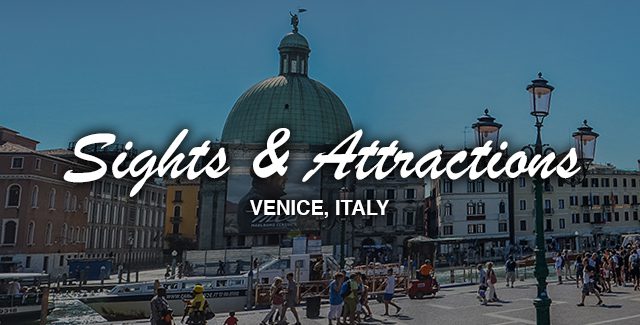 We had an early morning start. Our train was set to depart at 6:45am to Venezia. We arrived around 10:30am giving us plenty of time to explore Venice for the day.

EXITING THE TRAIN STATION IN VENICE

When we exited the Venice train station (Stazione di Venezia Santa Lucia), it was a little disorienting. On this August summer in Venice, hundreds of pedestrians walking by and in the distance the canal but we couldn’t even see the water because of the boat traffic. A few moments later, the people and boats parted and we saw the canal.

The first thing Bill did was to inquire about tickets to hop on the water ferry (vaporetto) bus service. It’s typically "what you do when you arrive at Venice Santa Lucia railway station" – Venice’s Official City Pass

SIGHTS OF VENICE FROM THE WATER FERRY

Narrow Walkways But Always Something Interesting to See

Guarding the entrance to the Grand Canal, this 17th-century domed church was commissioned by Venice’s plague survivors as thanks for their salvation. Baldassare Longhena’s uplifting design is an engineering feat that defies simple logic; in fact, the church is said to have mystical curative properties. Titian eluded the plague until age 94, leaving 12 key paintings in the basilica’s art-slung sacristy. –Lonely Planet

An island church built by Palladio, decorated by Tintoretto and Bassano, and offering great views from the campanile… –Reid’s Italy

"The first St. Mark’s Basilica was built on this spot in the 9th century to house very sacred relics—relics that had been stolen! In 828, merchants from Venice stole the body of St. Mark the Evangelist, one of the four Apostles, from Alexandria, Egypt. According to the legend, they snuck them past the (Muslim) guards by hiding them under layers of pork in barrels! While at sea, a storm almost drowned the graverobbers and their precious cargo, it’s said that St. Mark himself appeared to the captain and told him to lower the sails. The ship was saved, and the merchants said they owed their safety to the miracle. The entire story is pictured on the 13th-century mosaic above the left door as you enter the basilica. There’s enough mosaic here to cover 1.5 American football fields…" – Walks of Italy

Completed in 1934, spanning the Grand Canal between Santa Croce & Cannaregio.

Elegant wooden bridge over the Grand Canal with lovely views.

…so named because it crosses the Grand Canal at the Galleria dell Accademia, one of the top museums in Venice… –TripSavvy

It crosses the Grand Canal towards its lower, southern end, linking the San Marco district… offers two of the best views in Venice, looking along the Grand Canal in each direction. On one side lies the dome of Santa Maria della Salute, and on the other is the quieter bend which eventually takes the canal towards the Rialto Bridge. –Italy Heaven

Other famous bridges in Venice.

"…stone-arch bridge crossing over the narrowest point of the Grand Canal in the heart of Venice. Built in the closing years of the 16th century, the Rialto Bridge is the oldest bridge across the canal and is renowned as an architectural and engineering achievement of the Renaissance. It was designed and built by Antonio da Ponte and his nephew, Antonio Contino, following a design competition in the city." –Britannica

"This exquisite clock can be found on the bell tower of Venice’s Santi Apostoli church in the city’s square of the same name. While the church was built in the 7th century, the tower and clock were added in the late 17th century." –Waymarking

Undeniably a romantic notion and a one-of-a-kind experience but is it worth it?

The Most Famous Bridge to Kiss Under – Venice’s famous Bridge of Sighs was made popular as a place to kiss in the movie, A Little Romance. In the movie, an American girl and French boy fall in love and go to Venice. In a touching scene, they declare their love with a kiss on a gondola ride beneath the Bridge of Sighs. –Trip Savvy

Then you have this James Bond scene under the Bridge of Sighs:

Although, I’ve never seen the movie, I’ve heard of the romantic tradition of kissing under a bridge. Are you a movie-goer like me? Maybe subliminally watching American movies filmed in Venice makes you think you’d enjoy a gondola ride.

After watching passerbys on their gondola ride, we decided to skip it. From the amount of gondolas which look like bumper boats, to seeing gondoliers on their cell phones while working and knowing the hefty price tag (UPDATE: as of 2018 – €80 for a daytime ride and €100 for rides after 7 pm) for a 40 minute ride.

More about What to Expect on a Gondola Ride in Venice.

WATER, SNACKS AND EATING IN VENICE

For views, coffee and strawberries with cream… we take a load off at Caffè Ristorante Canal Grande.

"The siesta is historically common throughout the Mediterranean and Southern Europe. It is the traditional daytime sleep of Spain and, through Spanish influence, the Philippines, and many Hispanic American countries. In Dalmatia (coastal Croatia), the traditional afternoon nap is known as fjaka (from Italian fiacca)." –Wikipedia

Bill has welcomed the afternoon nap as we wait for the train ride back from Venice to Rome. Ciao for now Venice.

Accessory for Travel and Self Portraits